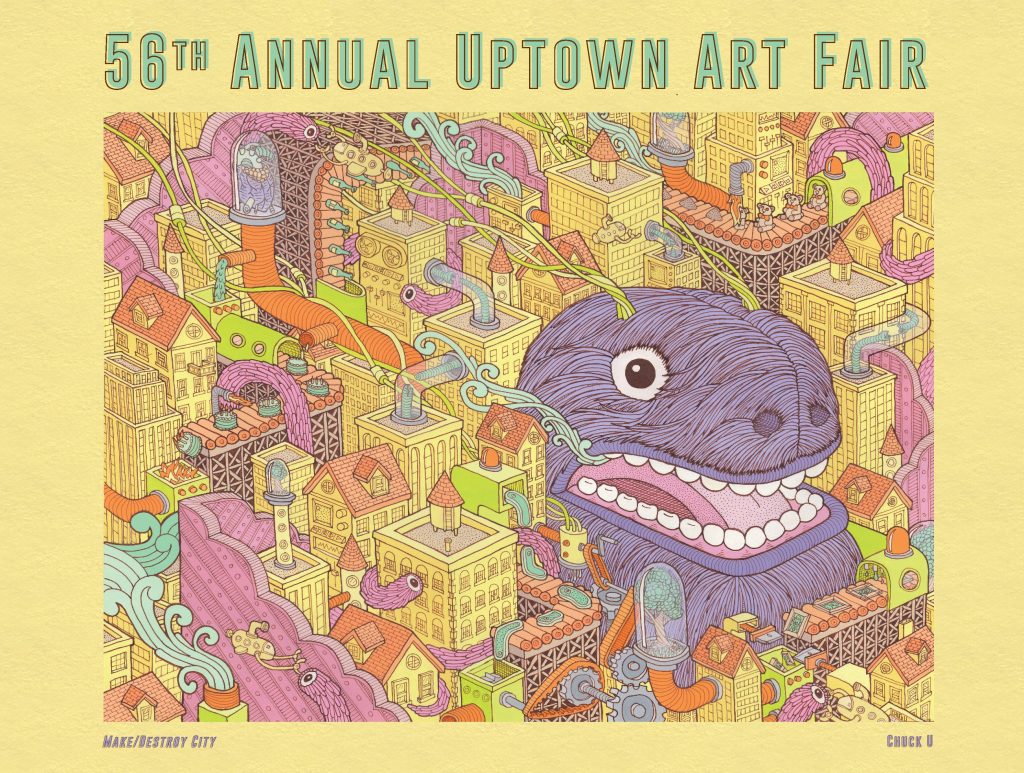 This year’s featured artist is Minneapolis illustrator and painter Chuck U. His piece, “Make/Destroy City,” will serve as this year’s commemorative print and will be sold in two different sizes exclusively at the official Uptown Art Fair merchandise tent during the run of the Uptown Art Fair for $15 and $25. Proceeds from the commemorative print, as well as much of the proceeds from the art fair, go directly back to the Uptown community in support of ongoing programs and new initiatives.

Chuck used his colorful and self-proclaimed “weird and line-y” style to create a custom piece of art specifically for the Uptown Art Fair.

“It’s really cool to be named the 2019 featured artist for the Uptown Art Fair,” said Chuck. “It’s been a ‘thing’ most of my life – I remember working at the Uptown Kinko’s years ago and walking around the art fair on my lunch breaks.”

In the ‘90s and early 2000s, the 2019 Uptown Art Fair Featured Artist Chuck U could be found making his mark around the Twin Cities through his graffiti and heavy involvement in the local hip-hop scene.  His unique style gained popularity as he attended music festivals around the states and created artwork for many musicians. A Minnesota native, Chuck U now lives in the LynLake neighborhood, just blocks from the footprint of the Uptown Art Fair.  When he isn’t making art, Chuck loves to hang out with his friends, girlfriend, and his dog Hogarth.

Chuck U is a painter, illustrator and muralist who specializes in whimsical, yet intricate works that celebrate the unusual and unexpected. His pieces are populated with fanciful flora, fauna and unusual landscapes that are playful, yet masterful, and aim to spark imagination and joy in the viewer.

Chuck’s prints utilize a combination of traditional pen and ink technique, at times with digital coloring applications that are produced, or as limited edition screen prints. His paintings and murals are approached with a similar sensibility, but take on a life of their own, transporting the viewer with scale, color, and the skillful line work that has become his signature.

Influenced by artists such as Eastman and Laird, MC Escher, and James Jean, Chuck U continues to bring his own mix of the delightfully unpredictable with the intricately elaborate, to create works that are boisterous, witty and memorable.

Chuck has risen to prominence in the Twin Cities, and some might recognize his style from his #OnlyinMN mural, which was used to welcome visitors for Superbowl LII in 2018.  Chuck U has also been the in-house artist for Indeed Brewing Co. for over 6 years, creating designs for their beer cans, as well as art for the brewery.  Although he has designed many amazing cans for Indeed, Chuck’s favorite one is the Mexican Honey Light (which also happens to be his favorite beer!).

For the past 3 years, Indeed Brewing Co. has been the official beer sponsor of the Uptown Art Fair, so this collaboration between Chuck and Indeed presented an exciting opportunity for the fair.  Indeed has created a special brew, called the Uptown Art Fair Hibiscus Shenanigans Brew, just for the 2019 Uptown Art Fair. The cans, which are exclusively sold during the art fair weekend, will feature the 2019 Commemorative Print by Chuck U, titled “Make/Destroy City”.

In discussing this year’s print, Chuck U described the connections to Uptown and the art fair, pointing out a machine creating paintings which go on to get destroyed at the end of a conveyor belt.  Furthermore, there are other details showing food being made, then destroyed, as well as beer bottles. When asked why he chose this theme, he said, “Well, I just thought it was funny, but also showed all of the things you can get in Uptown”.

The commemorative print is available for sale during the Uptown Art Fair Launch Party, with the proceeds going directly toward benefiting new programs and initiatives in Uptown.

Visit his website HERE to see his amazing work! 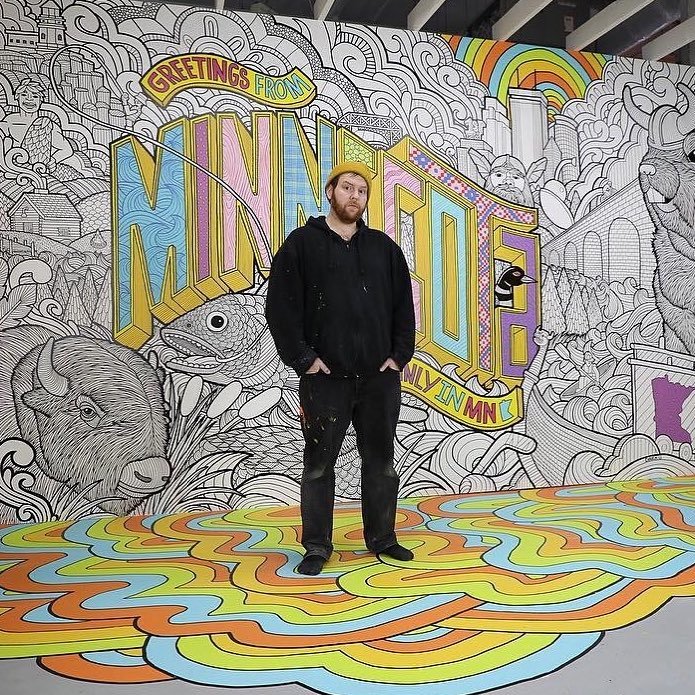